An important intersectional Issue for Black and Asian LGBTQA people 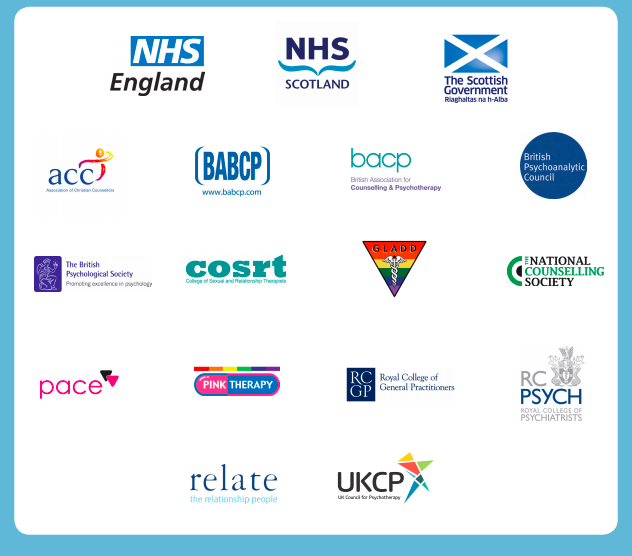 Dominic Davies, founder of Pink Therapy, and BAATN leadership team member Kris Black whist working on the UKCP’s Diversity, Equality and Social Responsibility Committee have been working hard on a Memorandum of Understanding that is not fully complete yet but there has been progress. BAATN stands in solidarity.

Dominic has said the following:

Major UK organisations have been working against Conversion Therapy for a number of years, publishing a Memorandum of Understanding against the practice (2015) and updating the document to warn against conversion therapy in relation to gender identity and sexual orientation (including asexuality).

Aware of concerns regarding the future of Conversion Therapy in the USA, and pleased that Malta has banned the practice and that Taiwan has drafted legislation to ban the practice, we are publicising the following statement in solidarity with like- minded healthcare organisations in the USA.

“We the undersigned UK organisations wish to state that the practice of conversion therapy has no place in the modern world. It is unethical and harmful and not supported by evidence.

Conversion Therapy is the term for therapy that assumes certain sexual orientations or gender identities are inferior to others, and seeks to change or suppress them on that basis.

Sexual orientations and gender identities are not mental health disorders, although exclusion, stigma and prejudice may precipitate mental health issues for any person subjected to these abuses. Anyone accessing therapeutic help should be able to do so without fear of judgement or the threat of being pressured to change a fundamental aspect of who they are.”

Janet Weisz, Chair of the Memorandum of Understanding group, and Chief Executive of the UK Council for Psychotherapy, said:
“We have always been clear that sexual orientation and gender identities are not mental health disorders. Any therapy that claims to change these is not only unethical but it’s also potentially harmful.

“Therefore, this practice has no place in the modern psychotherapy profession. The public must know that they can access therapeutic help without fear of judgment.

“It is great to see so many parts of the psychological and medical profession both in the UK and abroad uniting on this key issue.”

Helen Morgan, Chair of the British Psychoanalytic Council, said:
“Forcing a particular view or prejudice upon a patient has no place in therapy and all competent therapists will implicitly understand and appreciate this.

“Psychotherapy aims to liberate people so they can live fuller, more meaningful and more satisfying lives – and patients meeting a psychotherapist should be able to assume that this is always the case in therapy.

“I am pleased to support moves against conversion therapy and I would urge professional colleagues – wherever they may be – to do the same.”

Professor Helen Stokes-Lampard, Chair of the Royal College of GPs, said:
“The Royal College of General Practitioners is proud to support this statement. As medical professionals, we are highly trained to treat our patients regardless of their sexual orientation – not because of it.

“Being gay or trans is not a disease, it is not a mental illness and it doesn’t need a cure. Any proclamations to the contrary risk causing harm to our gay and trans patients’ physical and mental health and wellbeing, as well as perpetuating discrimination in society.”

Peter Kinderman, President of the British Psychological Society, said:
British Psychological Society is very proud to endorse, support, and stand by this statement. I am proud to live in a country that is able to celebrate the full range of loving human relationships and to offer each one of us equality under the law. Many of us have experienced a great deal of persecution and discrimination as a result of our sexual orientation, and our role must be to combat such prejudice, not to add to it. When people are distressed, for whatever reason, we have a duty to reach out and help. But that must not entail regarding our sexual orientation as any form of pathology. I am very happy to be a party to this statement, and I hope it goes some way to contribution to a more caring and equitable society.”

Dr Andrew Reeves, Chair of the British Association for Counselling and Psychotherapy, said:
“BACP strongly believes that anyone seeking therapeutic help, regardless of their gender and sexual diversity, should have access to unbiased and informed therapists who provide ethically skilled therapy. We agree that there is no place in our society for conversion therapy, which is unethical, harmful and not supported by evidence.”

I’m pleased we’ve managed to make this statement. I’m saddened we’re not yet at the point of producing the more inclusive MoU2 but I do believe we’re not too far off it. There is a story there, but I’m not currently at liberty to discuss it!

All too often those of us working with Gender Sexuality and Relationship Diverse (GSRD) clients hear about poor practice from other therapists. Social Media and the consulting rooms of my colleagues who work a lot in this area is replete with the lived experience of GSRD people who have been encouraged by their therapists to assimilate into the heternormative, cisnormative majority rather than having their identities recognised and understood.

It seems that it’s still not acceptable in modern Britain to be bisexual, asexual or have a non-binary identity. This is not good enough and I am pleased that there are people concerned about this issue to sit around a table and address it. I have hopes that in the not too distant future, therapy training courses WILL be training therapists to know how to respond to clients who come from GSRD backgrounds.