Trump vs Hillary or Trump vs Obama?

“This whole effort from Trump is to erase Obama, that’s what’s really going on here. They are trying to erase him as an entity”

I went to see ‘The Hotel Cerise’ a play written by Bonnie Greer, and afterwards attended a discussion of the themes within the play involving Bonnie and the rest of the cast. This play was so much more than an adaptation of a Chekhov play that it was billed as. 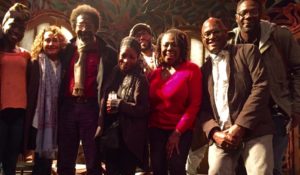 The play came about when Bonnie was making a radio piece about African-Americans in World War II and she met this black woman, an older lady, who said “we didn’t worry about segregation in those days because we had enough money so that we didn’t have white people around at all. We didn’t have to get on the buses, we didn’t have to do anything”. Bonnie was intrigued by this class of black people who were insulated from segregation and racism and wanted to put that story on stage.

In the post play discussions it was noted that there were a couple of African-American estates which African-Americans built so that they didn’t have to worry about segregation. There was something called the ‘Chitlin Circuit’ which was a collective term for venues throughout the eastern, southern, and upper midwest areas of the United States that were safe and acceptable for African American musicians, comedians, and other entertainers to stay and perform in during the era of racial segregation. Performers like Ella Fitzgerald, Betty Smith and Louis Armstrong couldn’t go to a white hotel to stay so places like the Hotel in this play, the Hotel Cerise, offered them what they used to call ‘a vacation without aggravation’ so they didn’t have to worry about racism whilst they were on the road.

The family in the Hotel Cerise,  the Mountjoys, were given money by their white ancestors so they were able to build a Chitlin Circuit refuge. The play is set in modern times where the Hotel still exists but times are a changing with new blood coming with new ideas. Bonnie wanted the audience to think about how skin colour is such a drama in the United States, that you can’t think about anything else, you can’t get to think about nuance. She wanted to get through the door of skin colour to find human beings. She simply wanted to start with characters as human beings and end with human beings.

Of note on the stage, on the mantelpiece, was a picture of Obama. Bonnie talked about Obama and how two terms are not enough for him to do what he needs to do to overcome some of the fear associated with the black other. Bonnie believed that Hillary Clinton will be an extension of the Obama administration, Obama’s third term. That’s why they (The Trump campaign and others) are trying to stop her. This whole effort from Trump is to erase Obama, that’s what’s really going on here. They are trying to erase him as an entity. She noted that the killings of black men in America that has sparked the ‘Black Lives Matter’ movement is a re-enactment of this and part of erasing Obama’s legacy. Bonnie went on to say that when Trump becomes president all of Obama’s acts will be undone, he will become a footnote and a mistake in the history of the United States and that’s the gameplay. She also said it’s important that Hillary gets into the Whitehouse so that doesn’t happen and that’s why the Obamas are campaigning so hard for Hillary right now too.

I’m going to take it one step further and suggest that Trump has studied racial politics and understands that, given there has been a two-term Obama  administration, he can play on the fears, anxieties and paranoias of the white working class to gain some leveraged in the race to the White House. He claims that the media are against him and are blocking his voice getting out there, he claims that social media, Facebook, Twitter are suppressing the establishment misdeeds and he says that he will refuse to accept the legitimacy of the election if it doesn’t go his way. This is the paranoid narrative of a certain section of the white population that believe their rank as the dominant group has been usurped by other nonwhite groups and that their needs and wishes are being given second place, where it was once given first.

As one of the audience members noted “in America skin colour is always the first dynamic and skin colour determines your destiny”.

There’s an awful lot at stake in terms of race politics in this upcoming US election, that’s for sure.