Being Greater Than Our Suffering

“The most authentic thing about us is our capacity to create, to overcome, to endure, to transform, to love and to be greater than our suffering” Ben Okri 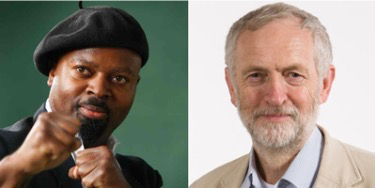 I read Ben Okri’s book ‘A Way of Being Free’ some 15 years ago and remember being blown away by what he had to say about the power of stories in our lives, embracing cultural differences and evoking a new kind of politics. It was a very important part of my initiation into a way of being that is both hopeful in its outlook and grounded in the reality of the world as it is. Ben Okra is regarded, as one of Africa’s leading writers and if you are creative in any way this book is a must.

It was facinating  to Ben Okri in conversation with Jeremy Corbin at the Southbank Centre. They were talking about creativity, literature, art and culture. When this was planned the UK political landscape was very different and inevitably the issues of the European Union and Jeremy’s leadership machinations came through. Something I wasn’t aware of was that Jeremy Corbyn spent two years in Jamaica, with Voluntary Service Overseas after leaving school, something he has described as an “amazing” experience.

Listening to Ben Okri on stage was the same as experiencing his words through his books and novels. He wrote a poem called A New Dream of Politics. This was in response to Jeremy Corbyn calling him a genius amongst others like Maya Angelou and James Keir Hardie in his Labour Party conference speech. Ben read this poem in the masterful way that he does. It is a reminder of the power of his writing and the potential to reach out to our higher selves even in the rough, tough world of politics.

Here is the poem.

A New Dream of Politics

They say there is only one way for politics.
That it looks with hard eyes at the hard world
And shapes it with a ruler’s edge,
Measuring what is possible against
Acclaim, support, and votes.

They say there is only one way to dream
For the people, to give them not what they need
But food for their fears.
We measure the deeds of politicians
By their time in power.
But in ancient times they had another way.
They measured greatness by the gold
Of contentment, by the enduring arts,
The laughter at the hearths,
The length of silence when the bards
Told of what was done by those who
Had the courage to make their lands
Happy, away from war, spreading justice
And fostering health,
The most precious of the arts
Of governance.

But we live in times that have lost
This tough art of dreaming
The best for its people,
Or so we are told by cynics
And doomsayers who see the end
Of time in blood-red moons.

Always when least expected an unexpected
Figure rises when dreams here have
Become like ashes. But when the light
Is woken in our hearts after the long
Sleep, they wonder if it is a fable.

Can we still seek the lost angels
Of our better natures?
Can we still wish and will
For poverty’s death and a newer way
To undo war, and find peace in the labyrinth
Of the Middle East, and prosperity
In Africa as the true way
To end the feared tide of immigration?

We dream of a new politics
That will renew the world
Under their weary suspicious gaze.
There’s always a new way,
A better way that’s not been tried before.

Who are the inspirational figures quoted by Jeremy Corbyn?